Unstable Signal, at the opening season label’s event after the paused covid-19 period, comes back with a huge one, bringing two great artists. Peter Van Hoesen after so many years is back in Athens and Peder Mannerfelt, for the very first time comes in Greece on Saturday the 11th of December 2021, at Temple Athens. It is going to be a very different night consisting of two parts. In the first one it will be presenting the distinctive experimental abstraction of contemporary Techno and in the second one, dark and high quality Techno.

Belgium’s Peter Van Hoesen is considered as one of Techno’s tastemakers but never has been that typical techno artist. Peter is someone who sculpts sounds for many different environments – the club, the home, the gallery or even the museum. In performance terms, Peter lays down dark and arresting techno sets as well as captivating, story telling live musical journeys. Because of that he is renowned around the world for his high quality, high creativity, high levels of consistency, constantly translating his personality into his music.

From obtuse angles to intense physicality, Peder Mannerfelt’s highly individual take on techno demands attention and consideration. While his many-sided body of work reaches back more than a decade, the Swedish producer’s current investigations in the field of experimental dance music are as prolific as they are unpredictable. Employing subtle props and working with striking visual accompaniments, Peder Mannerfelt’s live shows bring the immediacy of his art front and centre in your cerebellum.

In that event we will also have the return of Interplay Electro (MBasix & Chris Silver T) at Temple Athens. It is a very different live duet (Synthesizer and Drums) which moves from Experimental to Industrial and Noise always on abstract forms.

MBasix the founder of Unstable Signal, who after a significant presence in the underground Greek Rock and Jazz scene with some of the most important groups as a musician, dived into Electronic music in the early 90’s and has released his music on labels such as EMI, Warner music, Advanced, Distrophonix, Pegasus Records, Anazitisi Records etc. Also his new LP will be released by Subsist Records shortly.

After more than 20 years of service as the drummer of Greek neo-psychedelic pioneers Purple Overdose and No Man’s Land, Chris Silver T decided to temporarily abandon his drum kit in order to embark on a private journey in the sea of sounds that laps the shores of his mind.

Following on with the line up, It is a great pleasure to have the debut of Kondaktor at the Unstable Signal’s events. He is the mastermind of the record label Modal Analysis and the man behind Fasma Festival and Bloom who has released his music on labels such as Abstract Reality, Further Records, Where to now and Modal Analysis amongst others.

That party also marks and some other events inline, welcoming Simos Ares and GRΞTA as new residents DJs of Unstable Signal.

Athens based Simos Ares moved through different genres, Techno, Acid, Chicago & Breaks. He is a very experienced and well known Dj, co-founder of the non-profit project KAWRS and a former member of Cannibal Radio, who also runs his own record label MOREGENRES.

GRΞTA is a very talented, upcoming DJ, resident of the infamous Qreclaim parties and a founding member of the Waiting Room Project. His sets are both soothing and brutal, structured and chaotic, always based on techno but rarely limited to it.

We will also have another debut. KAWRS will perform for the first time at the Unstable Signal’s event. Simos Ares and Neda, co-founders of KAWRS, are both Athenian Djs playing electronic music together under the alias KAWRS djs, moving through different genres such as Electro, Breaks, Bass, Acid & Techno.Furthermore, they participate and support, a variety of independent events and projects of the Greek underground scene. 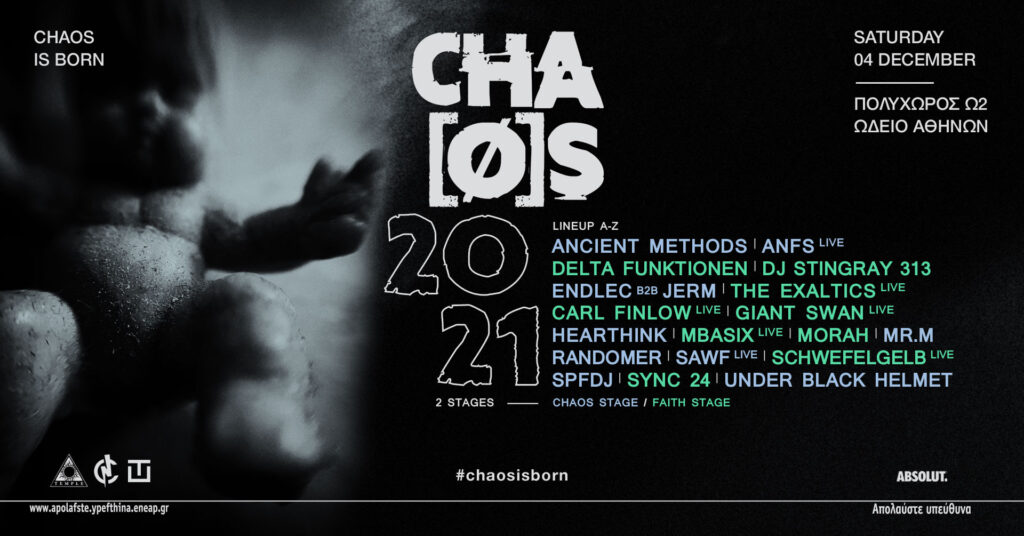 A first moment of freedom where the dancefloor echoes ancient rites, an act o passion for the birth of the child.
On the 4th of December the womb will deliver the birth of CHAØS.
And thus Chaos is born.

REIGN WITH LOVE CHAØS! THIS WORLD IS YOURS.”

With a completely unique lineup aiming to represent the most important names in today’s worldwide dance scene, CHAOS aims to present and combine a monumental multi-stage experience that will span for more than 12 hours, aiming to grow into something unique for Greece.
Created by two diverse but extremely experienced teams, a) 3 Shades of Black with a persistent presence in the live events scene both with its external/independent productions but also by their curation & management of Temple Athens and b) Cosmonauts with their extremely successful presence in the dance scene, in CHAOS this experience & passion unites again into a common goal.

A pure and true electronic/dance winter festival that will achieve a life of its own and will expand through the years to come.